http://austinandersen.wix.com/space for more pictures and information

We moved to small apartment in NYC and had no room for desk. Decided to create simple standing desk to save room. I purchased Ekby Hemnes board and 2x Ekby Valter brackets. This fits the new 27″ imac well, but not much room for keyboard or mouse. I also built tv center with besta shelfs and had lots of leftover shelf separator boards in same color. I got some screws and drilled the besta shelf into bottom of Hemnes board. Now I have plenty of room for keyboard and mouse and some shelf space next to imac for accessories.

UPDATE
I purchased this Antec TV Backlight  on Amazon and applied it to the rear of the TV. It automatically powers on when plugged into the TV’s USB port. It gives a nice glow behind the tv and also supposively makes it easier on your eyes when watching tv at night.

First I bought Besta Vassbo Doors with middle square indents. Looking back I could have saved $5 on each door and got the Vara, but I thought the guideline to cut out center would be helpful. I bought Jig Saw from ikea to cut out the inserts on 6 of the doors to give the cabinets room to breathe for my electronics and also for remotes to work through. I then bought speaker fabric from amazon (I bought 3 rolls and used 2). I had sand paper laying around to smooth edges.

I bought Powershot staple gun at Home Depot, but can buy at amazon and bought T50 3/8″ staples.

Then cut approximate size of cloth to cover all edges. Take staples gun and start with corners and fill in rest. You can also use glue to keep the edges down in between staples. Just make sure its snug fit but don’t pull to stretch as it might tear.

Finished look from the front

What it looks like on the besta unit. I also chose to leave out the back thin inserts in the besta unit to give room to breathe on back side and also give plenty of room for cords. I have a large media server that fit perfectly into the Besta shelf unit. I cut one large hole on side facing windows to give open space for access to rear panel and fans of server. I covered it partially with our Mohu Leaf OTA Antenna . I needed airflow coming into the server so I bought 2x Cooler Guys USB 120mm fans with mounting brackets. I also wanted to keep dust out so instead of grill protector from kit I bought these cheap filters on ebay. I then aligned the fans to be exactly where the 2 large fans on server case are. Cut out the holes and mount the fans. Now I have excellent airflow through case. Next issue was the subwoofer. I wanted to keep it hidden so I tried hiding with besta shelf. It wasn’t quite tall enough, but wife was okay with look as its mostly covered. I cut out large insert in back to allow subwoofer to fit through as it was also too long. This gave besta shelf no support and would bend out since its not on the ground. To fix I used one nail to fasten door to both sides and hid them under speaker fabric and it works fine now. Finished product. I liked the look of white cabinets with the black doors. We went with high gloss black doors because I think it looks nicer but you could save money and get plain black/brown. For speakers I sold my surround setup and got lucky on ebay with finding Definitive Technology SSA-50 for $200. It does a decent job in small apartment, but not even close to quality of old 5.1 Polk setup. It looks nice and fits in the media center. Wife added Ikea Fillsta table lamp for extra lightning. For cable management I purchased cable ties, sticky mounts for cable ties, and TV wire cover. Too mount the tv one could go with simple mount or one that moves and swivels. I have used both types in past. This time I went with swivel version to be able to slightly move tv towards our couch since they were offset. Its also MUCH MUCH easier to plug cords in. Review
Bought this to attach to our headboard to watch shows/movies on our ipad in bed since we don’t have tv in bedroom. It is longer than the other one we tried so I give them credit for that. Its slightly awkward to bend in tight corners, but that is understandable considering the need to be sturdy to hold tablet up. I tested on ipad air and it will hold it steady in certain positions extending straight out. Laying in bed it sticks out enough to not have to twist neck too much. I wish it had a couple more inches to be in front of me, but this is best option I’ve tried. One negative is the way that ipad mounts blocked it from how I originally wanted to mount i. I wanted to mount in middle of headboard and extend out between us and have ipad mounted on rear to face us. The way this mounts you can only curve it backwards and by that point it would be only few inches from headboard and impossible to see the screen. Instead I mounted on side of headboard as seen in pictures I posted.

Cons
Wish I could have mounted it facing rear (see above)
Could use another 2″ in length to be perfect, but that might affect sturdiness

I would recommend this product 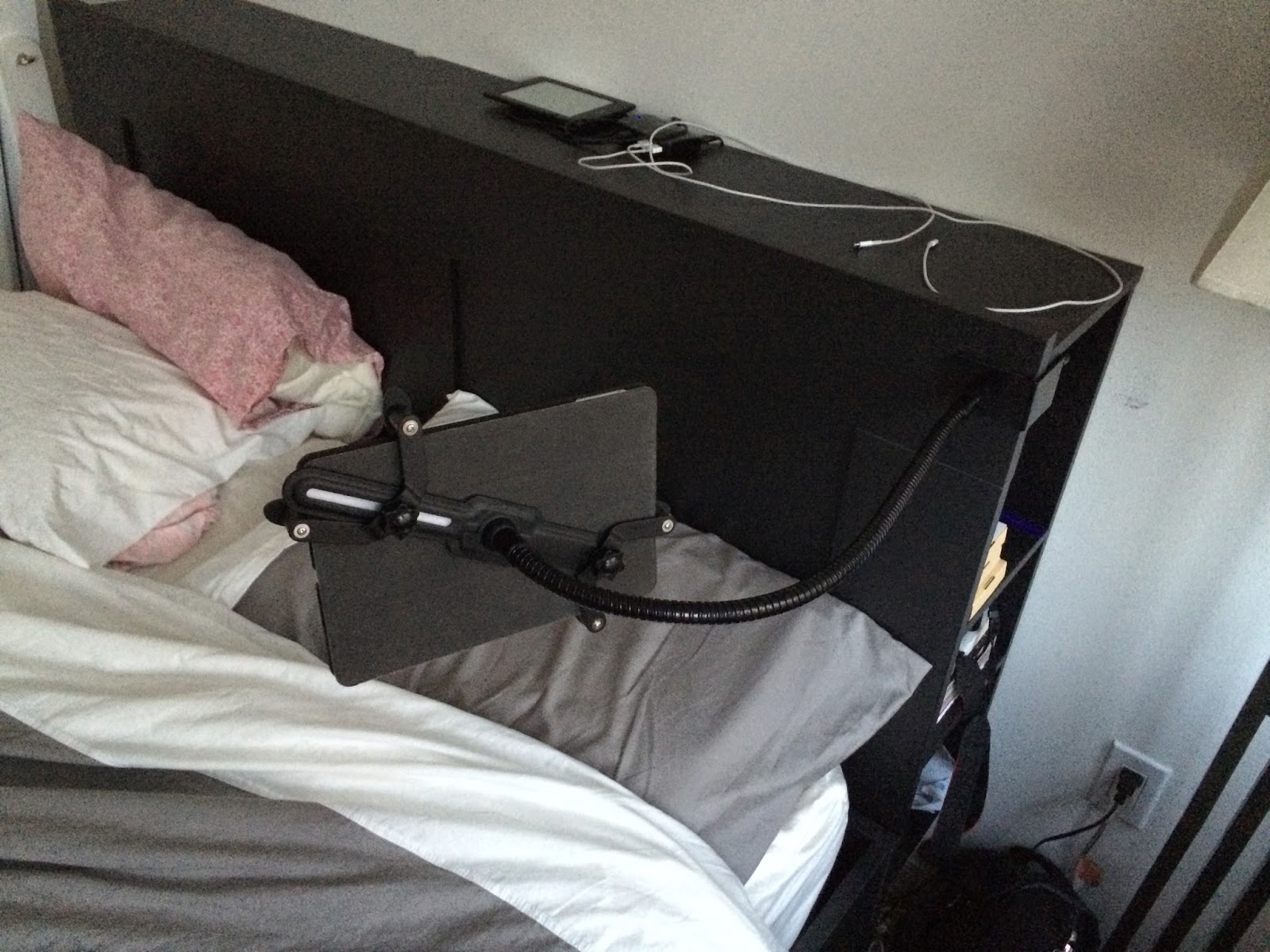 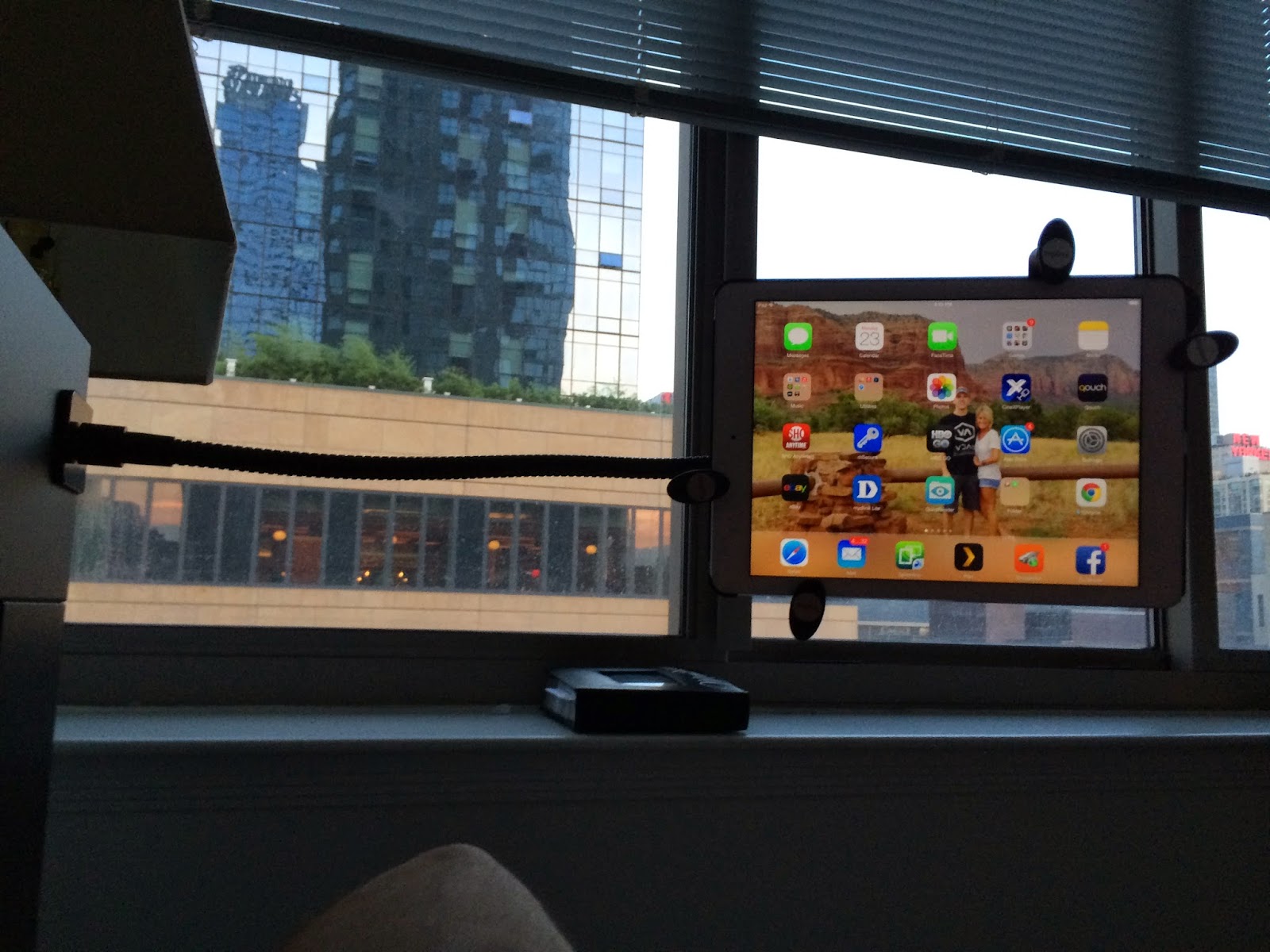